Nikita Chappell attended Sir Wildfred Laurier Secondary School from 2011-2015 and was a London 86er for four years. After finishing high school Nikita attended Brock University and was a member of the women’s basketball team. Nikita was a city all-star in 2015, and won a bronze medal in her last year in the Juel league.

Kira played for the 86ers in the 2010- 2011 season before playing in the JUEL league for Tri- County Thunder (2011-2013). Kira was a multi- sport athlete who attended East Elgin Secondary School in Aylmer, Ontario from 2008- 2013. She made several appearances at the TVRA South- East and WOSAA championships for different sports including basketball, soccer, and volleyball. After high school, she went on to play basketball at Brock University for four seasons (2013- 2017). At Brock, she studies Kinesiology. In the 2013- 2014 season, she was named to the OUA West All- Rookie team. In her last season with the badgers (2016-2017), she was first in the OUA for points per game (20.0) and fourth in the OUA for rebounds per game. (10.3) She was also named an OUA First Team All- Star. Currently, Kira is finishing her degree with hopes to complete her masters in Occupational Therapy in the future.

Mairead attended St. Christopher’s Catholic Secondary School from 2008-2013 and played for the 86ers in the year of 2010-2011. While at St. Christopher’s Mairead won multiple awards for her achievements in athletics as well as academics. After graduating from St. Christopher’s Mairead played a two years at St. Francis Xavier University in Nova Scotia studying Forensic Psychology and went on to attend Algoma University and play for the women’s basketball team. Mairead attended Algoma for their Law and Justice program. Mairead placed 3rd in blocks in OUA in her 2015-2016 season and 2016-2017 year, as well as 6th in the CIS for blocks.

Shannon played with the 86ers for 3 years and attended Oakridge Secondary School from 2009-2013. During high school, she won a WOSSA championship in grade 10. Shannon went on to play at Dalhousie University for three seasons while completing her degree in kinesiology. Shannon currently lives and works in Halifax.

Grad year: 2017
Jillian Kettlewell attended Strathroy District Collegiate Institute from 2013-2017 and played for the London 86ers in 2016. After finishing high school, Jill went on to play for Western University where she is undergoing her undergraduate degree in medical science. Jill hopes to be able to attend medical school in the future. Jill received multiple awards for athletics and academics during her high school career. She was the SPECTRA award winning recipient for her high school and received a scholarship for her academic success.

Natalie attended Westminster Secondary School from 2012-2016 and was an 86er from 2013-2015. After graduating from Westminster Natalie played a year at Southwest Furfaro Prep School and then went on to attend Nipissing University and play for the women’s basketball team. Natalie attended Nipissing for the concurrent education program and received a scholarship for her academic success.

Natalie earned several awards at Westminster for her excellence in the classroom and as an athlete. As an athlete Natalie has won two TVRAA championships with the Senior Girls basketball team at Westminster, a WOSSAA silver in 2014 and a WOSSAA championship in 2015. Natalie also won the Fran Wigston award as the Female Basketball Player of the Year in London.

Bethany Miller attended Westminster Secondary School and was an 86er from 2014-2016. After finishing high school Bethany went to Centennial College where she is taking Human Resources. Bethany plays on the Centennial Women's Basketball team and received a scholarship to play basketball there. In her first year Bethany finished second in the OCAA East in 3-pointers made.

As an athlete in high school Bethany has won two TVRAA championships with the Senior Girls basketball team at Westminster, a WOSSAA silver in 2014 and a WOSSAA championship in 2015. Westminster finished the 2015 season with an 11-2 record in London, and went to OFSAA for the first time in over 30 years.

Kaleigh attended South Collegiate Institute from 2011-2015 and was  a London 86er from 2012-2015. In high school Kaleigh won a TVRAA championship at South and a WOSSA bronze medal in 2014. After high school Kaleigh went on to take Environmental Design at Fanshawe College and play for the women's basketball team.  As a member of the Fanshawe Falcons Kaleigh has won two OCAA bronze medals.

Bridget attended St. Michael’s Catholic Secondary School from 2009-2014 and played for the 86ers in the years of 2009-2011 and 2012-2013. While at St. Mike’s, Bridget won multiple awards for her achievements in athletics. Bridget went to AAA OFSAA in 2010 as the host team and then qualified for AA OFSAA in 2012 and 2013 by winning WOSSAA. Bridget earned an antique bronze medal in 2012. After finishing high school O’Reilly decided to attend Lakehead University to study Business Administration and play basketball at the CIS level. Bridget made it to the final four in her first year. In Bridget’s second year she lead the OUA and placed 4th in the CIS for made three pointers and in her third year was chosen for the OUA’s second all star team. Bridget is currently continuing her studies and basketball career at Lakehead.

Sara Passenier attended Strathroy District Collegiate Institute from 2013 - 2017 and played for the London 86ers in 2016. After finishing high school, Sara attended Lambton College for hairstyling. At Lambton Sara played for the Women's basketball team at Lambton. After the one year program, she plans to continue her education at the college and apply for the esthetics program, which is also a one year fast track program.

Kiera attended Oakridge Secondary School from 2009-2013 and was an 86er for 6 years. After finishing high school Kiera went on to play basketball for Fanshawe while taking the collaborative nursing program at Fanshawe/Western. While at Fanshawe, Kiera won the Fanshawe Female Rookie of the Year award in 2014.  During high school Kiera won a WOSSA championships in grade 10 and captained the Oakridge girls team for several years. While a member of the 86ers Kiera use to volunteer her time to help coach at our house league program. Kiera is currently a nurse in London.

Kim attended Huron Park Secondary School in Woodstock, ON. from 2012-2016 and played for the London 86ers in 2016. After finishing high school, Kim went to Niagara College where she majored in Pre-health science. After completing the Pre-health science Kim continued her education by entering the Occupational Therapist and Physiotherapist assistant program. While attending Niagara College Kim played for he Women’s Basketball team. Due to her academic and athletic success Kim earned a scholarship to attend Niagara College. 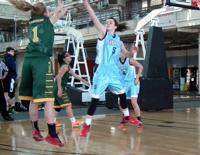 Rebecca attended Westminster Secondary School and was an 86er from 2013-2016.  After finishing high school Rebecca went to Algoma University in Sault Ste Marie were she is taking biology with the hopes of attending medical school. Rebecca plays on the women's basketball team at Algoma where she received a scholarship for basketball and her academics. Rebecca also won the Phil Mcnamee Scholarship ($20,000 over four years) for a graduating Thames Valley District School Board student who demonstrates excellence in academics and athletics while over coming adversity.

Rebecca earned several awards at Westminster for her excellence in the classroom. As an athlete Rebecca has won two TVRAA championships with the Senior Girls basketball team at Westminster, a WOSSAA silver in 2014 and a WOSSAA championship in 2015. Westminster finished the 2015 season with an 11-2 record in London, and went to OFSAA for the first time in over 30 years.

Authentic Mexican cuisine and the best burrito in London!

If you're looking for promotional products we promise to make ordering quick and easy, and we're sure you'll save money

Dedicated to helping patients of all ages achieve a beautiful, healthy smile.